Everything on Tohu is free to use under CC-BY license

Figure.NZ’s mission is to get the people of New Zealand using data to thrive.

We do this because we want to live in a country where everyone can take part in creating a delightful New Zealand. We believe we can make progress towards that by helping everyone understand the things they care about, so they can make great choices.

We make it easy for everyone to find and use our country’s numbers for free, through our website, as well as helping people learn how to use those numbers in their day to day lives.

We believe data isn’t just for experts, and that everyone can use numbers — including you!

Before the 2000s, it was hard for people to share information and to communicate widely. This shaped the world we lived in. The best future was created by having a few great leaders — of countries, of companies and of communities. It made sense that those leaders had information delivered directly to them to digest, consider, and make plans for the future.

Communicating was expensive and time-consuming. Mass-communication like engaging with communities was largely limited to convincing others about decisions that had already been made and mobilising their support. This required communication that lacked nuance — it had to be clear, simple, and unambiguous. There was no space for sharing all the information and thought processes that went into making decisions.

That world no longer exists. Now it’s easy to share incredibly rich, deep information, and to communicate with many people at once across huge distances.

This fundamentally changes how we can organise ourselves and make decisions. The future can now be created with everyone making great, informed decisions in all areas of their lives. We can all help shape the direction of our businesses, our communities, and our country.

There are many factors that go into making great decisions. These include knowing how to ask good questions, how to listen to those who have important lessons to share with us, and listening to our instincts. One factor that’s really important is data; specifically, information expressed as numbers.

Everyone can use data

Each of us only sees a tiny slice of the world. Measurements and numbers enable us to interpret patterns and trends that are broader and deeper than anything we can directly experience. This includes seeing how the country’s active sand dune extent has declined since the 1950s. 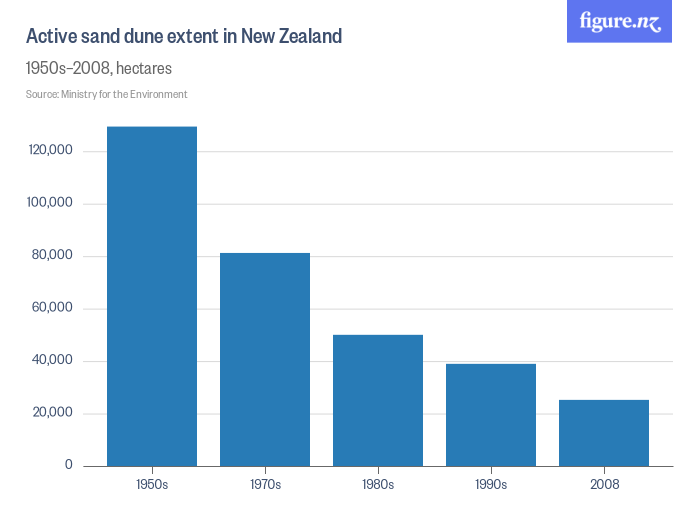 Or what percentage of people felt lonely most or all of the time in each region. 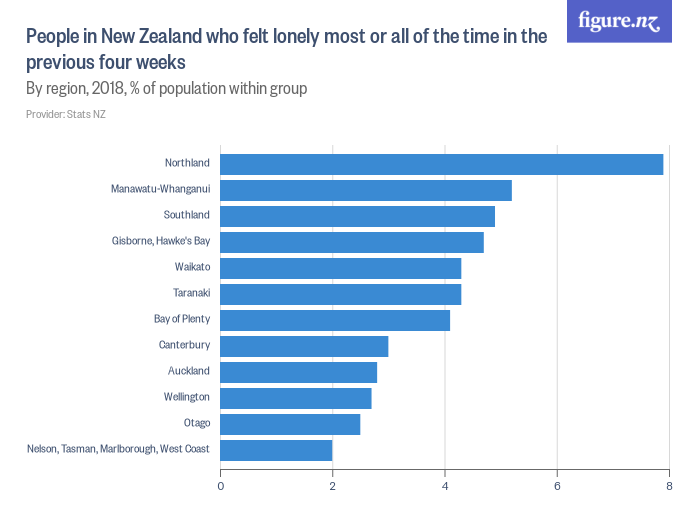 Data challenges us to pop up from our individual vantage points and see more clearly what’s around us. It enables us to understand how our experiences may be different from others. Although numbers alone don’t solve anything, they’re a vital piece of the puzzle — and working with data is often a good first step to understanding a situation’s context and complexity.

Yet few New Zealanders use data. Tens of thousands of datasets offer insights into the nation’s health and wellbeing, but they’re difficult to find and too hard to use for most people.

Figure.NZ exists to enable everyone to make sense of data and see Aotearoa clearly. Our dream is that when every New Zealander wants to use data, can get their hands on it, and knows how to use it effectively, the nation will be able to shift away from a culture of binary debate and arguments over what the situations are. Instead, we can debate where we want to head to and how we can get there, based on where we are now.

Why not the Government?

Creating a data democracy requires us to pull together the data and efforts of the public sector, the private sector, and academia, and be able to try bold new approaches, move quickly and experiment. Government isn’t structured to do this, nor are they able to take an independent position.

Why are you a charity?

Being a charity is critical to our position and ability to work with others. Data providers and users need to be able to rely on our independence, motives, and priorities. It’s about trust — New Zealand is, and always will be, unashamedly Figure.NZ’s priority.

We’re like Wikipedia; important infrastructure that wouldn’t work as a government or commercial entity.

How are you funded?

Figure’s 20 is a group of public, private and philanthropic organisations that have come together to support and engage Figure.NZ, and to work with each other to advance the use of data in New Zealand.

We’re honoured to have the support of these folk, who are committed to promoting data use in Aotearoa by:

You can see who the Figure’s 20 are on our Partners page.

Figure.NZ is more than the website you see at figure.nz. Behind the scenes, Figure.NZ has built a custom web application called Grace which lets us take spreadsheets of data that aren’t machine readable, and convert them into tidy, useful formats that we publish for everyone. We then use this data to create charts, maps, and other content.

Grace and figure.nz run on a bespoke technology stack, initially developed in-house as a result of a two year requirements-gathering process. Hosted on Amazon Web Services in Sydney, both applications are built using Python/Flask. Our primary data store is PostgreSQL, and search is powered by ElasticSearch. On the frontend, we use d3/vega for chart rendering, while our UI is built using React.

Figure.NZ is a registered charity run by The Figure.NZ Trust. The Trust charity registration number is CC48842.

Figure.NZ deeply appreciates donations or koha from people and organisations who want to support our mission.

Donations can be made by bank transfer to:

If you’d like a receipt for your donation for tax purposes, please email ngapera.riley@figure.nz and we’d be more than happy to provide one.

Figure.NZ was founded by Lillian Grace. Lillian had the idea for Figure.NZ at 1:57pm on 24 February 2012. We know the time because she felt like it was going to be a big deal and wrote down how she was feeling in the moment.

Lillian’s twisty career path prior to Figure.NZ gave her a unique vantage point. She originally trained for and taught high-school physical education at Kaipara College, and went on to help run Academy Award-winning Massive Software, before joining The New Zealand Institute think tank.

There, Lillian used tools like OECD data and the Statistics NZ website for the first time, and was amazed by the thousands of stories about our country she found hidden away in numbers — stories that never saw the light of day. In subsequent months, Lillian learned to use data in her thinking under the guidance of Institute Director, Rick Boven, and presented to groups what she had learned. As part of this, she always included simple charts to illustrate the stories the data held.

Lillian found that most of her audiences could understand the charts, and were surprised and interested in what they showed. She realised people weren’t avoiding data because they weren’t interested or were fundamentally incapable. Rather, finding and using the data as it existed in complex tables was too hard and time-consuming. This meant it remained something only experts used, and only when they were paid to investigate a particular topic. 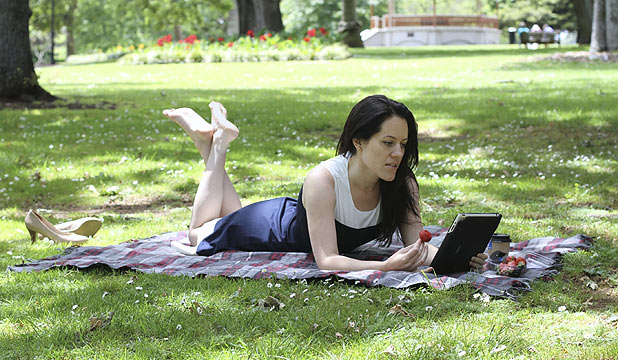 Lillian’s experience at the New Zealand Institute led her to contemplate what the most valuable thing to spend her time on would be. She found herself on a picnic blanket, under a tree in Hawke’s Bay, coffee and iPad at hand, wondering what to do next.

She cared about pretty much everything, and choosing just one thing to focus on was hard to imagine. Lillian realised all the things she cared about — from growing tech companies, to reducing youth disadvantage, or improving environmental outlook — shared one thing: to succeed, you needed to understand the relevant data. She had a sudden thought:

“Imagine if there was a place online that had all the data in simple, visual form so it was fast and easy for everyone to use. A place where people could look at and understand data on a daily basis, that was easy enough to peruse that we got answers to questions we didn’t even know to ask. Imagine if EVERYONE started using data for EVERYTHING! What then?!?”

And so Figure.NZ began, though under a different name. The initiative was originally called Wiki New Zealand, as Lillian hoped many people would contribute charts to the site. It soon became apparent this wouldn’t work, as there weren’t enough people using data to start with, and there was little consistency in how data was treated and presented.

Lillian quit her job and started working on Figure.NZ properly on 1 April 2012. Initially, she focused on 3 things: talking to as many people as possible (about 230 people in the first few months) to see how people responded to the idea, and how they would use it; drawing out what the product would look like and what it would include; and assembling a governance board.

The Trust was established on 16 July 2012. They helped refine and articulate the organisation’s purpose. Some of the points from the original whiteboard session have lasted the distance. 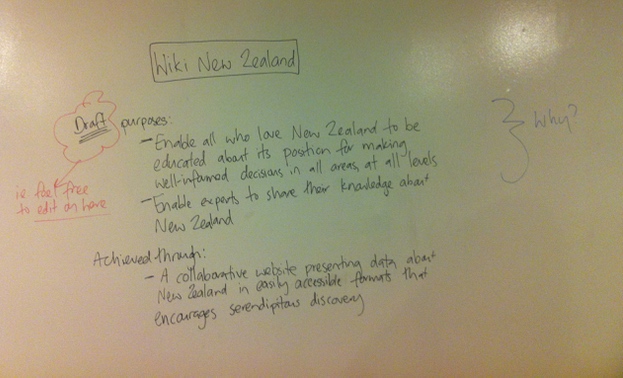 The original site was made with a combination of Wordpress, Excel, and a bunch of macros. It went public with 150 charts on 9 December 2012. Over 1,000 people visited the site on the first day, and that was just the start.

Lillian was Figure.NZ’s CEO until August 2019, when she stepped out of the role to start Figure Group. Read Lillian’s blog post about the transition and handover of the CEO role to Ngapera Riley.